You are here: Home / Archives for Lego / Lego Minecraft 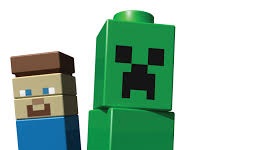 It is hard to look past the Lego Minecraft 21102 when the online game has been extremely popular with children. Minecraft was the fastest growing online game in 2012 and now you have the opportunity to take it off line with one of the most popular style of toys around – LEGO.

My three children all play the version of Minecraft Xbox 360 and they talk about it quite a bit. They each have a favorite thing to do.

I am always happy for my kids to play a game that is not a mindless activity, provided it is in moderation. As I find with all Lego, my kids can spend hours playing and integrating what they have played online or on a DVD with the offline world. They even combine Lego sets for more creative play.

There are 8 distinct modules that you can make from 480 pieces – Including 2 buildable Micromob characters: Steve and Creeper. You can build 4 modules above ground and 4 below or you can build in dozens of different ways and customize the networks and caves. It is really up to your imagination!

There are so many skills a child learns while playing with Lego and it is one of the best toys around IMHO. It is also the type of toy that you hold onto and pass down through the generations and so it is an investment.

Lego Minecraft is well built and is reasonably priced, especially compared to some other sets such as Lego Ninjago or Lego Super Heros which seem to carry a much higher price tag per Lego set. Those who have bought Minecraft have been very happy but I must say that due to demand, it is not always available. While this set is aimed at ages 10+, my 6 year old son is a big fan and can work with his older brother and sister on building a Minecraft micro world. You can read the reviews of Lego Minecraft 21102 here and also get a good price on the set.

The blocks are easy to use and put together and the build options are enough to keep you and your kids entertained.

I’ve included a video so you can get an idea of the size, pieces and an up close look at what Minecraft Lego looks like built – oh, and the fun that is being had….this being the most important thing!

All up, the Lego Minecraft 21102 is a set that has been given the thumbs up and I have to agree it is worth the money for the fun you will have. So, “To the bat cave Robin!”….oops sorry, I got my Lego sets confused.